Dating in Taiwan might be the best kept secret hiding place for finding the most well rounded and educated date. If you guessed somewhere in America, you haven’t done enough traveling, and for that matter It might just be time to plan a trip to Taiwan. I must say there has not been a single place on this planet in my vast experience traveling that I found more genuine women for dating. They were polite, respectful, clean and honest. It was a cultural thing, something that all of them must adhere to as this was a tight nit group, with very little foreign influence. I must point out that these qualities are becoming harder to find in America. If you are a single American male, who is educated and open to being treated the way your father or grandfather was by their wife, than dating in Taiwan just might be for you. 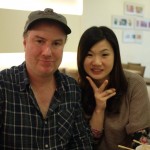 I can only say that I never felt so “genuinely” welcomed in my life. Was it a smoke screen? I don’t believe so, it was way to uniform and across the board for that, but if it was, I bought it hook line and sinker. The women of Taiwan looked at me with that rare blushing smile you no longer get in America, and remained submissively respectful as they chatted with their friends in a visually admirable fashion. The Taiwanese women I met were well educated and made salaries that were equal to or greater than that of my own.

I was surprised at the open acknowledgment of my appearance, I am not accustomed to American women doing this. In America, I am slightly above average looking, not a Brad Pitt, but still decent looking, yet I rarely get approached from today’s overtly diseased social network. I can probably count on one hand how many women half my age told me I was handsome, and than continued to have a genuine interest in me. In Taiwan, I beat my lifelong numbers of social encounters with the opposite sex once or twice a week. Taiwanese women who hold jobs and were well educated still were enchanted with my charisma, charm and unwillingness to keep quiet about my beliefs. Their culture is trained against expressing this behavior, which in turn allows them to become attracted to common American personalities and translate them into movie star like persona’s. I was something here that I just couldn’t be in my country, and as an additional gift, she had a perfect figure, and was upset that she couldn’t be more for me. What? Yea, no complaints… Unfortunately for me I was already taken, and believe it or not, I stayed true to my word, only because I have been fighting off my hypocrisy when it comes to sexual encounters while in a current relationship.

I will admit the attention I received was much needed, and I was being socially reprogrammed in a way that will now never again allow me to slip back into the social sickness I grew adjusted to in my home country. It could be a rebirth for you too, if you allow your self the time and space to breath on your vacation. I took a month, and wished it was two, but the knowledge I gained has allowed me a safe haven mentally for my future dating in Taiwan possibilities.