The one thing I have noticed when traveling in the Philippines, is that Catholicism is stronger here, than anywhere else I’ve ever visited including my own country. This should light up a green flag. I am not Catholic, however, Catholicism follows strict rules and guidelines when it comes to dating and marriage. The one thing I noticed in the Philippines over other such areas such as Thailand, is that the women here, seemingly seek out relationships based more on a Western-style. 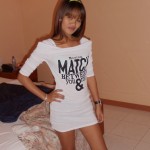 The cultural differences between Thai and Westerners are great, I don’t find these differences to be as great in the Philippines. First of all, it is extremely rare to run across a Filipino whom does not speak English. Filipinos like their Thai counterparts are very family-oriented and half of the income always goes to the senior members of the family. The Philippines, does not have divorce, so marriages here are taken very seriously as they are truly lifelong. When contrasting these two countries, I find Filipino women, to be more trustworthy than their Thai counterparts. I’m not saying you can’t trust Thai women, I just feel, that because Filipino women follow such strict guidelines in dating and relationships, that they are more apt to be designed like the 1940’s style of the Western world. Thai people are very religious also, but I believe they are much more forgiving in the sins of the flesh. Some would argue this, as Thailand has one of the highest castration levels on cheating males in the world. However, it is not uncommon to hear a Thai woman say “man will be man, he need sex so much, it okay for other woman, as long as he not love her.” I don’t think you’ll hear a Filipino woman saying that, as she expects, that when you marry her it’s a lifelong commitment. I imagine if I was take the statistical ratio of successful marriages between Thai and Filipino women with Westerners, that you would find a higher rate of success with Filipinos. I know through basic question-and-answer of tourists and travel dater’s all over the world, that this data holds true. I must state however, that I personally am more attracted to Thai personalities. I believe thier sense of humor, coupled with the broken English charm along with the sentiments of Buddhism lead me to this personal decision. I must warn the travel dater as to what he might believe based on preconceived notions when visiting either of these two countries. Think of these countries as you would your own. When you visit Kentucky, do you have the same experience that you would with individuals, as let’s say you would with New York? Even though you are in America, you will find that each state holds its own identity in the dating world. This holds true in these countries also, finding a girl on the wild side of Bangkok, and contrasting her with another woman, whom comes from Hua Hin, will present a large differential in personalities, even though Thailand and the Philippines are very much homogenous, which lends itself to have people that are much more similar in cultural styles than that of your average American. In the Philippines, I suggest Cebu as a starting point, if you’re looking for a serious girl to date and possibly marry. I would stay away from Manila and Angeles city, as these areas are more apt to cater towards sex tourism than that of Cebu. For more insight please consider visiting my travel dates as your information center when traveling abroad.